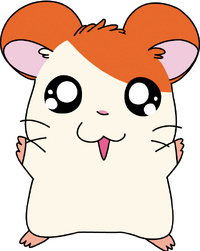 He's very courageous and he's very clueless about a lot of things. But he is always ready to help out his friends and his owner. He's also very kind.

He is a very little white and orange hamster.

Hamtaro is first seen in the anime in his cage trying to get out. His owner a girl named Laura, along with her parents just moved into their new house and Hamtaro does not like it one bit. He than starts jumping around in his cage trying to get out. After jumping around he goes out of his cage and runs a little bit around Laura's new bedroom. Laura than comes in the room and sees that Hamtaro is out of his cage. Luna than picks Hamtaro up and takes him back to his cage.

A little bit later Laura goes out of the room and Hamtaro goes out of his cage. But this time he gos outdoors. and meets a hamster named Oxnard. Hamtaro did not mean to but he scared the hamster, Oxnard. Oxnard than tells

him that he is missing his sunflower seed. Hamtaro than tells him that he'll help look for it. They than look for it and find it. Oxnard than gets so happy and starts jumping. They than fall underground only to meet a hamster named Boss. At first Hamtaro was scared of Boss but he finds out that Boss is a good guy. Boss than takes Hamtaro and Oxnard to his home. At his home Boss tells Hamtaro and Oxnard that he's in love with a female hamster named Bijou. They than go outside to Bijou's home and sing a song for her.

Later Hamtaro says good bye to his two new friends and runs home back to his cage right before Laura gets home. Laura than shows Hamtaro the new journal she got and it has a hamster that looks like him on it.

Laura is Hamtaro's owner and friend.

Oxnard is Hamtaro's very first ham-ham friend he made. Oxnard is always loseing his sunflower seed. Hamtaro will always help him find it again.

Bijou is the white hamster who lives in a house not far from Hamtaro and Laura. She is often seen with blue ribbons in her fur, and loves jewels. She and her owner Maria have recently moved from France, which is why she speaks with a French accent and sometimes doesn't understand English words the Ham-Hams use. At first, she is rather shy about leaving her cage and meeting the rest of the Ham-Hams, but Boss and Hamtaro hatch a daring plan to get her out and have her join the Clubhouse.

Retrieved from "https://awesomeanimeandmanga.fandom.com/wiki/Hamtaro_(Character)?oldid=13705"
Community content is available under CC-BY-SA unless otherwise noted.